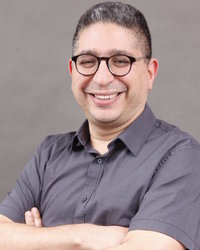 30 years of experience have not dulled the fascination Gil Tayar has with software development. His passion is distributed systems and figuring out how to scale development to big teams. Extreme modularity and testing are the main tools in his toolbelt, using them to combat the code spaghetti monster at companies like Wix, Applitools, and at his current job as software engineer at Microsoft.

Microfrontends are the "microservices" of the frontend world. They enable web apps to be divided into separate modules and thus scale to many developers. While the backend has consensus on how to architect microservices, the frontend is still in the experimentation phase. I will describe how Roundforest does microfrontends, in a way that translates microservices to a natural and logical frontend architecture that makes sense on the web.

A major earthquake has hit TC39, the JavaScript standards committee. A proposal for adding type annotations to JavaScript has just been approved for Stage 1. What is this proposal all about? How did it come to be? What is the motivation behind it? What are its pros and cons? Why are some people excited about it, some wary, some angry, and some afraid? As one of the writers of this proposal, I will delve try and answer all the questions above.