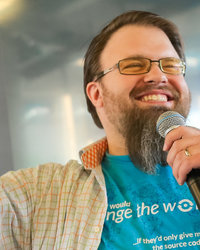 Tim likes making things, is a lover of well built APIs, and hates the top reply. He's built applications utilizing numerous APIs, created custom APIs for internal consumption, and as a one time developer evangelist he's helped other developers do the same.

Though it's the common use case, deploying your application using docker may seem a bit daunting at first, and require some changes you're not ready to make.

But if you want to get started with docker, there are plenty of uses that aren't deployment. In this 99% Yak-Shaving™ Free session, we'll focus on the ones that require little (or no) setup. You might even be using them before I finish talking.

There are things you can't - or don't want to - do inside a web request. Whether sending an email, processing a video, or consuming live data, you should be using a separate process - probably a daemon. Learn how to stop abusing cron, and easily daemonize a PHP script that responds responsibly to process signals.