Curious about those weird parameter we pass as arguments for JVM? This talk will show them in a didactic way, explaining the basics about byte code, memory model, garbage collector and many other concepts that developers usually have problems. Some performance tips based on JVM internals will be presented as well. 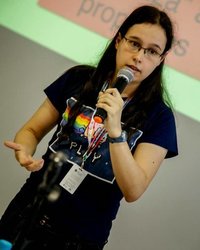 Hanneli (@hannelita) is a developer addicted to code, learn new programming languages, blow capacitors, do some C programming and commit useful (or not) code for random Open Source Projects that she finds at Github. She tries to help the community by writing blog posts and organising meetups about NoSQL, programming languages and Math/Physics/Science. She also likes Math, Lego, dogs, hardware, and [much] coffee.